John-Morgan Manos is distinguished with two of the most prestigious awards for Undergraduate students.

Already a glacier-rock-star, John-Morgan was awarded in early October with the Garry McKenzie & Henry Brecher Undergraduate Scholarship Fund for his project “Annual Surface Elevation of the Lehman Rock Glacier in Great Basin National Park”, and was recently also recognized with the 2017-2018 Taaffe award, the Department of Geography’s highest honor for undergraduate students for his outstanding performance.

John-Morgan (second left) is a major in Geography and an active member of the Glacier Environmental Group. Congratulations to him for these great achievements.

Bryan Mark, together with former BPCRC postdoctoral researcher Alfonso Fernandez, and colleagues from the Moritz Lab and from the University of Maroua, Cameroon, held a workshop in Ngaoundere, as part of the Capacity Building of stakeholders, students and researchers, as part of the MORSL project (Modeling Regime Shifts in the Logone floodplain). This project is funded by the NSF (Dynamics of Coupled Natural and Human Systems (CNH) program) and has the objective to explore the impact of human activities and climate change over the social, ecological, and hydrological systems, in the Northeastern floodplains of the African country. 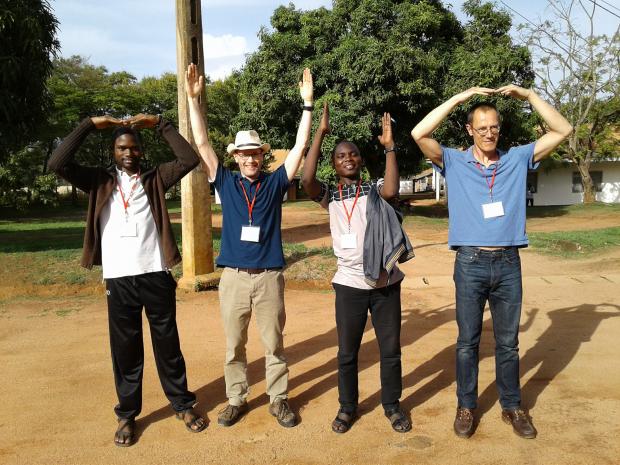 Press releases
Our group, through our colaborator Michel Baraer, has been interviewed during AGU:
“Glaciers in retreat around the world“, The Independent
“Peak water and  glacier melt pose thorny problems downstream“, The Daily Climate
“Images Show Big Retreat of Chile Glacier“, Time Science

We are proud to announce Alex as one of the few selected students for the National Geographic Society Internship program. According to National Geographic website “Our geography internship program, directed by Robert E. Dulli, Deputy to the Chairman, is designed for geography and cartography majors at U.S. colleges and universities who are currently in their junior or senior year of academic work, as well as master’s degree students. The purpose of the program is to furnish students a professional learning experience through participation in various projects aimed at the diffusion of geographic knowledge“.

_ Time: M,W 9:30-11:18 am
Location: The Learning Center, Byrd Polar Research Center,
136 Scott Hall
Instructors: Drs. Bryan G. Mark, Geography, and William B.
Lyons, Earth SciencesMountain environments comprise a nexus for interdisciplinary
research because their verticality transects all climatic zones, from
glacierized summits to diverse lowland biomes. As such, they form headwaters of
vital surface water resources, and are hotspots of biodiversity. Furthermore, mountain
environments are most “sensitive” to natural or human-induced
environmental change, a characteristic that calls for the attention of uniquely
trained scientists in identifying linkages between earth systems and social
science.This interdisciplinary graduate student seminar will explore
processes of climate and environmental change in mountainous regions. Our
approach will be grounded in physical biogeochemical processes, but to foster
transdisciplinary literacy we will incorporate both physical and human
perspectives. We will survey current research from different mountain regions,
including Eurasia, Africa, North and South America. Particular attention will
be paid to dynamics of changing environmental conditions over time, and impacts
to physical (e.g. climatic, hydrologic, ecologic) and human (e.g. social,
cultural, economic) systems. Specific content will be directed by students,
whose interests will be developed in individual case studies.

_Climate change in Great Basin National Park: Lake sediment and sensor-based studies By Scott A. Reinemann, Nathan A. Patrick, Gretchen M. Baker, David F. Porinchu, Bryan G. Mark, and Jason E. BoxAlpine
and subalpine aquatic ecosystems are highly susceptible to direct and
indirect effects of climate change, making them ideal study sites. We
recovered a sediment core spanning the last 7,000 years from Stella
Lake and a core of the last 100 years from Baker Lake in Great Basin
National Park, Nevada, in 2005 and 2007. We examined the cores for
subfossil chironomid (Insecta: Diptera: Chironomidae; i.e., midge)
remains. The midge communities in the lakes underwent little
compositional change through much of the 20th century; however, after
1980 a rapid lake-specific faunal turnover was observed. Because of
limited dispersal ability and restricted habitats, some lake species
will be extirpated by climate change. Fortunately, lake cores show that
even during the most arid periods the lakes did not completely
desiccate, but continued to support lake biological communities. To
complement the limnological work, an air temperature and humidity
micrologger network was deployed in 2005 and expanded in subsequent
years, now numbering 36 instruments. The sensor network that spans the
full park elevation range (1,639–3,892 m/5,377–13,063 ft) indicates
coherent seasonal and elevational variations, which help to interpret
the paleolimnology data. Climate models indicate increasing temperatures
and uncertain change in precipitation for the Great Basin region.
Although we may not be able to protect all ecosystems faced with climate
change, our collaborative educational research project exemplifies how
the National Park Service is equipped to document and interpret
climate change.

NASA project in the Bolivian Andes

_ Aftermath of the Imja Lake Expedition

Photo credit: Alfonso Fernandez
Alfonso Fernandez participated in the 2011 “Karthaus Summer School on Ice Sheets and Glaciers in the Climate System”. The course provided a basic introduction to the dynamics of glaciers and ice sheets with a focus on ice-climate interactions. The course was held in Karthaus (northern Italy).

Congratulations to Dr. Bryan Mark, who was awarded the Distinguished Undergraduate Research Mentor Award! Dr. Mark won this award for his work with the brilliant young Geographical minds that he has mentored through their research, which is why the award has the above title.
http://www.facebook.com/OSUGeography

Dr. Cuffey is Profesor at the Departments of Geography and Earth and Planetary Sciences, University of California, Berkeley. He visited The Ohio State University for the Edward J. Taaffe Physical Geography Colloquium. He spoke about the major glaciological factors contributing to the rise in global sea level. His topic raises the question of how environmental scientists should respond to requests for quantitative forecasts when quantitative precision is illusory.

Jeff La Frenierre has been awarded a 2011 NSF Doctoral Dissertation Research Improvement Grant for his research on glacier change and water resources at Volcán Chimborazo, Ecuador. He will be working in his research from October 2011 to July 2012 in that country.

Shawn Stone recently presented research results at the NE-NC GSA meeting in Pittsburgh, 20-21 March. Shawn was awarded travel funds for
the trip from GSA, and also used some of his award money from the (first) 2011 G. McKenzie Undergraduate Scholarship: http://bprc.osu.edu/scholarships.php#mckenzie.Eric Haas completed his B.A. in Geography during WI11 and graduated from OSU at the Winter 2011 Commencement. Congratulations, Eric!
Do you want to contact us? write us to glacierchangeosu@gmail.com