The Cañón del Pato is the wide canyon carved by the Rio Santa as it descends from the Cordillera Blanca to the Pacific Ocean. Complete with 35 tunnels, the road through the canyon is carved into the canyon wall and was featured on a History Channel special titled “Most Dangerous Roads.” A series of bocatomas (intake structures to divert flow from the main river into another channel) withdraw water for various uses– hydroelectric power, reservoirs, and irrigation for agriculture. 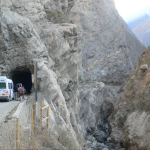 One of the many tunnels along the Cañón del Pato road

The canyon is so narrow that a flood would be a dramatic sight. We pointed at stratigraphic lines on the opposite canyon wall, imagining how high the water had come (and may come again in the future). A flood of any significant magnitude would easily overcome the bocatomas.

We toured the Cañón del Pato hydroelectric facility operated by Duke Energy, which has a total capacity of over 265 MW. The morning we visited, four out of six turbines were in operation producing 80 MW of electricity. Electricity production oscillates during the day in accordance with demand. To generate electricity, water is channeled into a tunnel nine kilometers upstream from the facility. The pipeline runs through the wall of the canyon- an incredible feat of engineering. At the Cañón del Pato facility the water drops through vertical tunnels (seen on the left of the diagram below) spinning up to six massive turbines. As a product of the facility’s remoteness the turbines are cleaned and maintained on site.